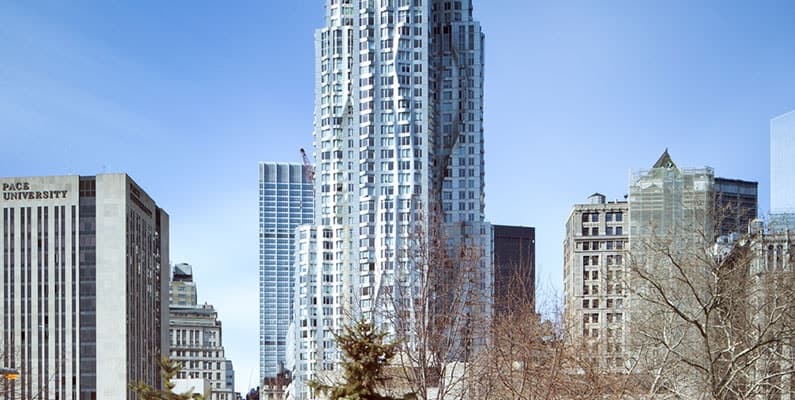 My second black and white photograph in seven months is called Visual Acoustics IX – Silence and Light – 8 Spruce Street – Rise. A building created by one of my favourite architects Frank Gehry. As you already know I’m not very productive and that is partly due to me being very critical at what I do and publish. All of my photos have to fit a specific theme and in this case I wanted the photo to be a part of my Visual Acoustics – Silence and Light series in which the emphasis is on how shadows evoke mystery and remove visual noise and hence create visual silence. Shadows to me are synonymous to silence and mystery, a notion I derived from architect Louis Kahn’s concepts behind his architectural creations and writings.

The 8 Spruce Street building by Gehry is a very iconic and amazing structure in New York City. You can basically approach this building in a multitude of ways. Considering the fantastic curves and the organic shapes of this building it would make sense to approach this in a more abstract way. Trying to capture this building as a whole in a more conventional architectural way can be quite a challenge since normal wide angle lenses can’t capture this building completely without any distorted lines so you need a vantage point that is not too far away from the building and not too close. After some Google Street View searches I found several view points that had a lot of potential. This is one of them and it is taken from a point near the Municipal Building Path. The 24 mm Canon TS lens has been shifted in its most upward position to capture the whole building.

Since this is a more conventional approach to photographing architecture, the fine art element of the black and white photograph had to come from my interpretation of the whole scene that should fit the concept of shadows creating silence and mystery. 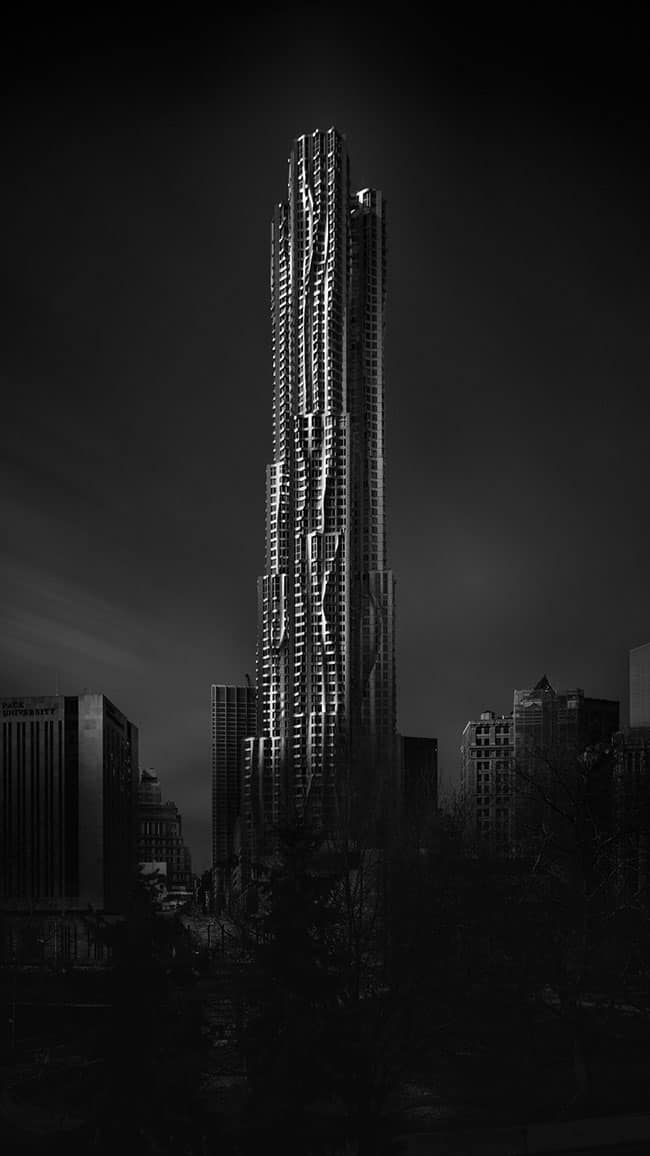 Although the foreground may look very dark, I’ve ensured that I didn’t use tonal zone 0 in those dark parts. I’ve largely been using the darkest values of tonal zone 1 in the foreground. If you look at this photo in its original dimensions and resolution then you can see the details hidden for the viewer looking at it in the ‘normal view’.

In this post I will show briefly how I processed this image from a conceptual point of view: the artistic thought process behind this black and white photograph. As mentioned earlier, the concept behind this image is to put the emphasis on shadows and remove the visual noise that would distract from the building without using modern editing tools like the clone or patch tool but simply to make effective use of that what is essential for any photograph: light and absence of it. And to be able to do that I need to shape and manipulate the light. Creating shadows not only to remove the visual noise of the big city, but also to induce and introduce visual and psychological silence and minimalism and at the same time keeping the context of the building in tact: it simply isn’t a building that is isolated from the rest of the city but an integrated and coherent part of the rest of the urban environment. And that also summarises the essence of my Visual Acoustics Series.

Here is the original colour photo of the 8 Spruce Street Building or Beekman building shot with 16 stops of the Formatt-Hitech IRND filters using the shift movement on my tilt shift lens. 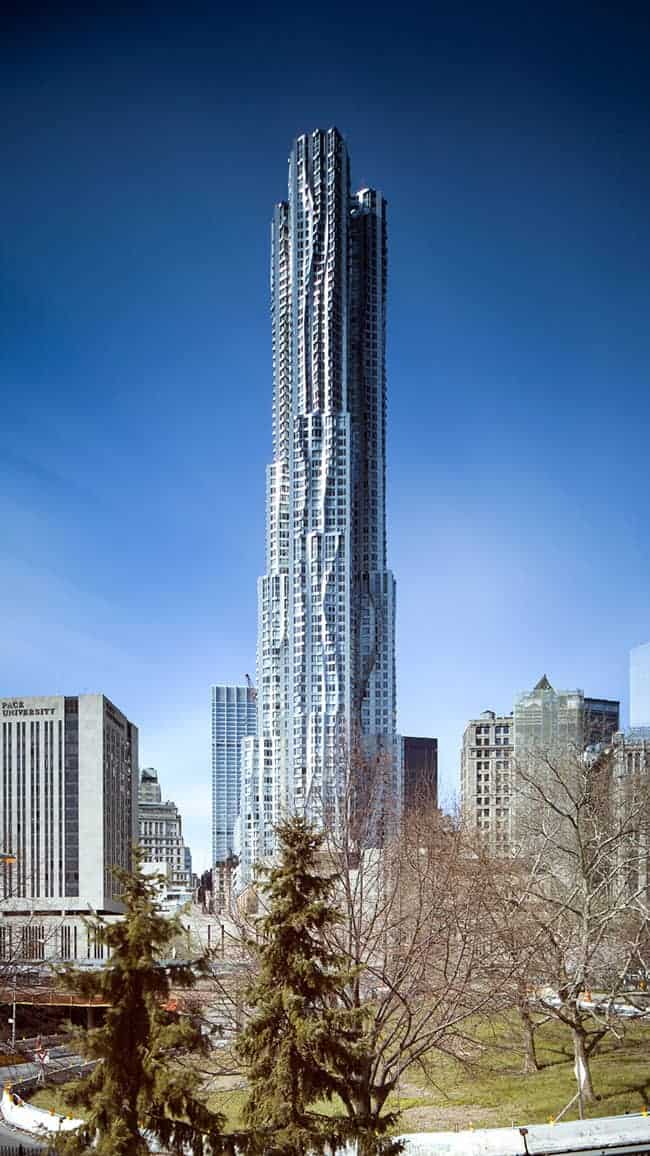 As you can see there is  a lot of visual foreground noise and the trees don’t seem to really add to the composition but in my view they add to the narrative context so I wanted to keep them and only show hints of the trees: it’s a beautiful building located amidst other buildings and a lot of green in the proximity.
First thing I did before converting it to black and white is to create one hard selection of the sky, a hard selection of the Gehry Building and several luminosity masks as you can see below. To save disk space I only created them in the original color photograph.

The normal hard selections of the sky and the Gehry building and the luminosity mask selections will enable me to control the 2 main characteristics of this photograph: control shape and control light. As you see I don’t create any separate selections for the various curved parts of the building but despite that I will have complete control over every aspect of the image by using the hard selections and luminosity mask selections in an effective way by adding, subtracting and intersecting selections while at the same time use the gradient tool as propagated in my iSGM 2.0 method of black and white photography conversion. Please refer to the book From Basics to Fine Art to read in detail about this and my concepts.

After that I’ve done some basic conversions and applied the iSGM2.0 method to come up with this image somewhere in the initial phases of my black and white processing workflow: 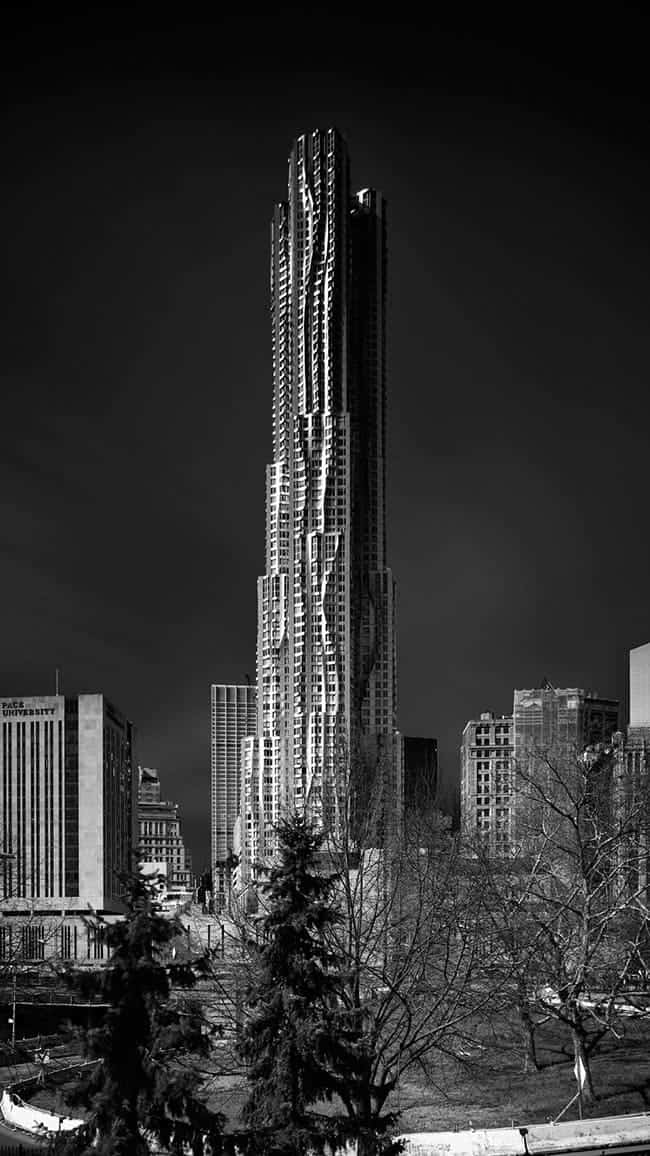 The foreground noise is clearly visible but the sky is getting close to what I preferred for this shot: the metal look of the building with its reflections would fit perfectly behind a darker background to create tonal separation and also selective contrast. See the chapter on the Rules of Grey in our book From Basics to Fine Art to find out on how you can effectively lead the eye in a composition by using selective contrasts and enhance tonal separation.

Next step is to remove the visual foreground noise to create silence and mystery. I did that by using the curves tool. See image below. 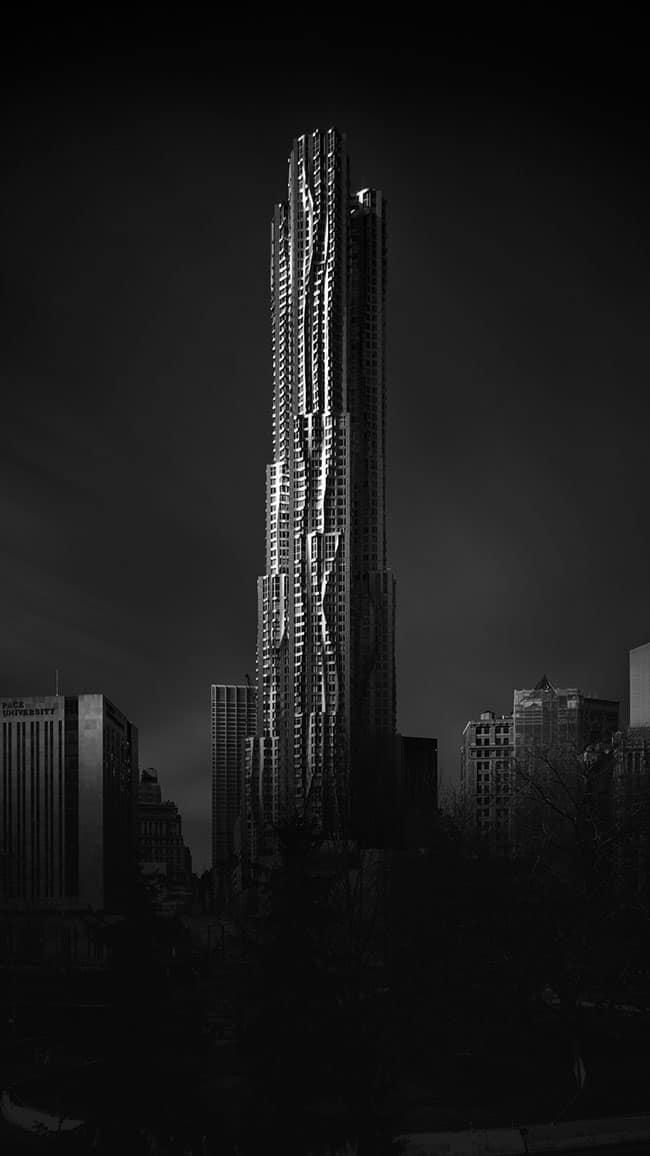 A darkened foreground to remove the visual noise in the foreground and create silence at the same time.

The foreground is looking a bit too dark but I will locally add some hints of light later on in the process. First I need to work on the details in the building by using luminosity masks and intersect them with the only hard selection I have of this building.

To see how the final result looks like when you painstakingly edit the various curved parts of the Gehry building I added a detailed outtake below of a part of the building. 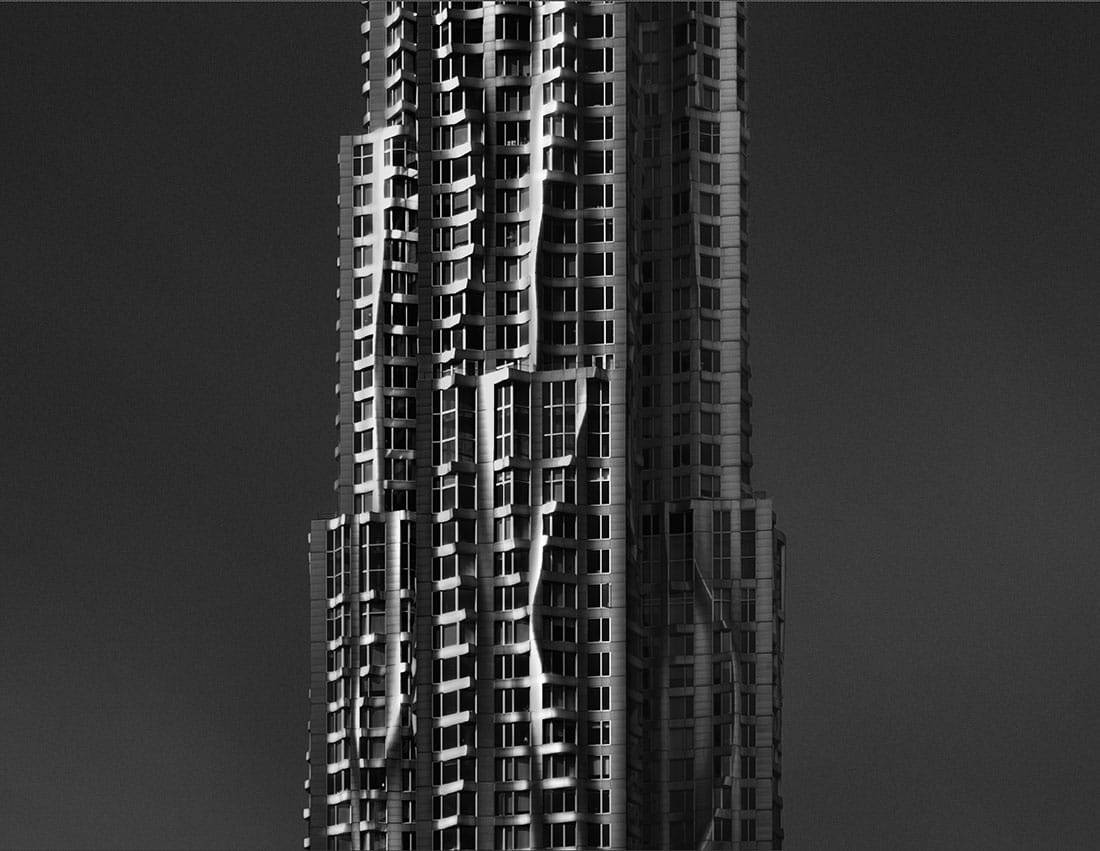 A detailed outtake of a part of the Gehry building.

I’ve tried to emphasise the reflective metallic parts of the building, not so much by highlighting them a bit but moreover by darkening the surrounding parts to increase the selective contrasts. The result is that the bright parts will look even brighter and the dark parts darker without even using very dark or bright tones. It’s a matter of illusion.

This is how it looks like zoomed in on a few details, the overal result and feeling is still dark but with a certain ‘softness’ to it. 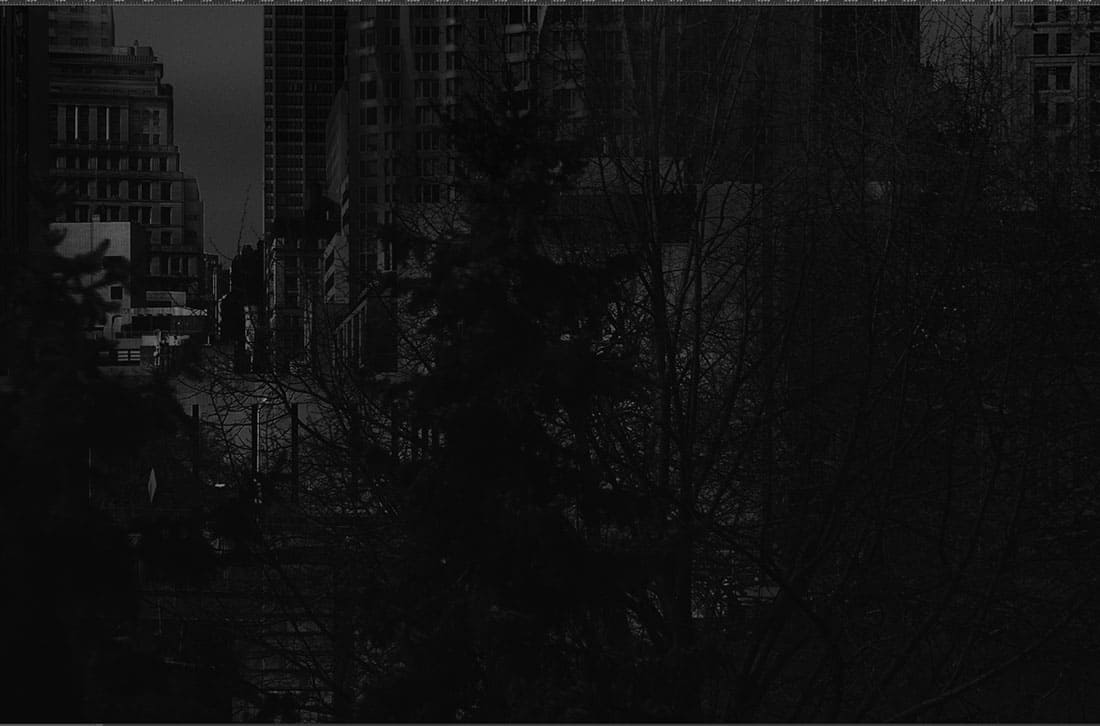 I created subtle hints of lights in the streets around the 8 Spruce Street building by using the luminosity masks.

If you want to know more and in more detail about iSGM 2.0 and the thought process of creating similar images like this, and to create images like this yourself, then you can purchase the eBook From Basics to Fine Art by yours truly and co-author Julia Anna Gospodarou from our web store . We will go into detail on this and the concept of Photography Drawing, iSGM 2.0, vision, use of tilt-shift lenses, architectural photography and much more in this book.