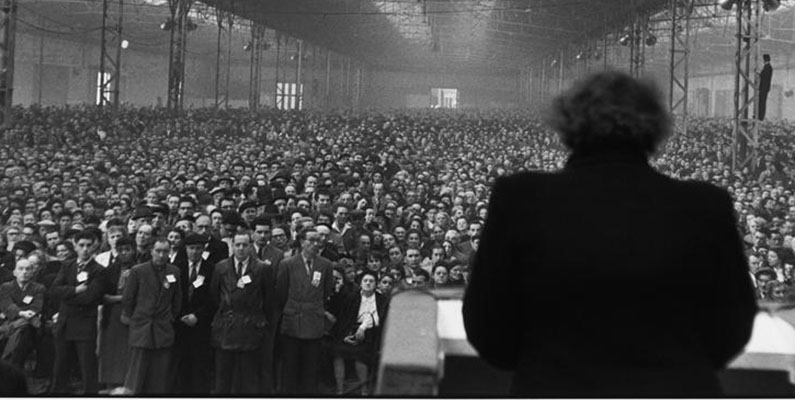 The photographers are randomly ordered and the order doesn’t reflect any ranking nor does this pretend to be an extensive list.

1. Edward Steichen 1872 – 1970 – The most famous representative of the so called pictorialism movement, an art movement that dominated the start of the last century. Considered to be the very first fashion photographer, creator of The Pond – Moonlight, which was the most expensive photograph ever with a price tag of almost $3,000,000 until the likes of Andreas Gursky, Cindy Sherman and Peter Lik broke that record.

Steichen partnered with Stieglitz in 1900, which resulted in the making of Camera Work.

Quote: “Photography is a medium of formidable contradictions. It is both ridiculously easy and almost impossibly difficult. It is easy because its technical rudiments can readily be mastered by anyone with a few simple instructions. It is difficult because, while the artist working in any other medium begins with a blank surface and gradually brings his conception into being, the photographer is the only imagemaker who begins with the picture completed. His emotions, his knowledge, and his native talent are brought into focus and fixed beyond recall the moment the shutter of his camera has closed.”

2. Alfred Stieglitz 1864 – 1946 – Some say he’s the spiritual father of fine art photography. Founded Camera Work, a quarterly journal, considered to be the best and most beautiful photo magazine ever made. Created a series of photos that only depicted clouds without any other reference points, called Equivalents, which can be seen as the start of fine-art in photography. Later on, Minor White wrote a famous essay on Equivalents, explaining Stieglitz’ concepts behind Equivalents. The clouds as subject matter didn’t matter, it was the feeling conveyed and the symbolism that mattered. Stieglitz was also a friend of Steichen and co-founder of the Photo-Secession, a movement that promoted fine art photography. Creator of iconic photographs like the Steerage, Spring Showers and several series of portraits of Georgia O’Keeffe 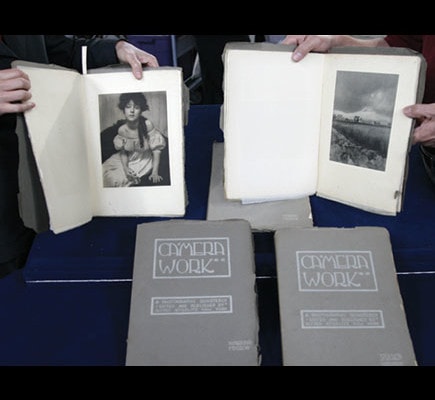 Back in 2007 on a episode of the Antiques Roadshow, a collection of 23 issues of Camera Work was valued at a price of $ 60,000 to $ 90,000. You can view the entire collection of images that Camera Work published on photogravure.com.

Quote: “It is not art in the professionalized sense about which I care, but that which is created sacredly, as a result of a deep inner experience, with all of oneself, and that becomes ‘art’ in time.”

3. Henri Cartier Bresson – 1908 – 2004 – Street photographer, photo-essayist, co-founder of Magnum photography. H-C B coined “The Decisive moment” to reflect that there’s a unique moment in photography when everything falls into place for the perfect composition to express a meaningful message. It’s highly intuitive and it cannot be repeated. Bresson was a master at that and created many iconic photographs that expressed this “Decisive moment’ and hereby elevating street or candid photography to an art form. Many street photographers after him have tried to capture the Decisive moment photograph, but only a few succeeded. One of them who should be mentioned is Andre Kertesz from whom Bresson gained inspiration. Kertesz called his Decisive Moment, “The delayed snapshot”.

Quote: “To photograph is to hold one’s breath, when all faculties converge to capture fleeting reality. It’s at that precise moment that mastering an image becomes a great physical and intellectual joy”

4. Robert Capa – 1913 – 1954 – War photographer, photo-essayist, co-founder of Magnum. His most famous, and at the same time a disturbing and iconic photograph, is a photo of the Spanish Civil war that depicts a man at the moment he’s being shot to death, called The Falling Soldier. The term Generation X was coined by Capa, who used it as a title for a photo-essay. During the first Indochina war, while being commissioned for a photo reportage of that war, he stepped on a landmine and became one of the casualties of one of the wars he documented so successfully.

Quote: “It’s not always easy to stand aside and be unable to do anything except record the sufferings around one.”

5. Ansel Adams 1902 – 1984. Arguably one of the best known American photographers. The way we perceive and assess a black and white photograph up to this day, is largely formed by Ansel Adams’ contributions for elevating black and white photography to an art form. The term zone system was invented by him and he described how a good black and white should look like: good coverage of all tonal zones and a result of perceiving a scene in his mind’s eyes: visualization. His knowledge and teachings are documented in a 3 Volume book called “The Camera”, “The Negative” and “The Print”, which is considered to be the best text book on (black and white) photography ever written and largely still apply to modern day’s digital photography. Adams was also known for manipulating his images in the dark room to align it with his vision, his ‘pre-visualization’, rather than to accept the original negative as it is. Look at the video to get an impression of Adams’ post processing in the darkroom and how much he manipulated his images and how his famous photograph “Moon over Hernandez” looked like in a straight print without any manipulation.

Quote: “Dodging and burning are steps to take care of mistakes God made in establishing tonal relationships”

One of the greatest portrait and editorial photographers of the past century who made many famous portraits of equally famous people. From Muhammed Ali and Kennedy to Churchill, Bogart and Hepburn: they were all iconized in front of Karsh’ camera. Karsh was known to give significant importance to the hands of his subjects, as any good portrait photographer would do, and he would lit their hands separately. Many of his photographs are familiar to many people even though they might not know the artist behind it.

Quote: “When one sees the residuum of greatness before one’s camera, one must recognize it in a flash. There is a brief moment when all that there is in a man’s mind and soul and spirit may be reflected through his eyes, his hands, his attitude. This is the moment to record. This is the elusive moment of truth”.

Edward is regarded as one of the great American photographers who mastered the landscape, the portrait and the still life photograph. Especially known for his famous photographs of a pepper that many photography students still try to emulate. What not many people know is that Weston described the concept of pre-visualization at least ten years earlier than Ansel Adams who made this a term that every photographer today knows about. Together with Ansel Adams he was part of a group of San Francisco photographers called Group f/64 who emphasized the precisely focused and correctly exposed subject.

Quote: “Anything that excites me for any reason, I will photograph; not searching for unusual subject matter, but making the commonplace unusual.”

Environmental portrait photographer. Arnold Newman took the art of portraiture to another level by trying to include the natural habitat of his subjects in his photographs. Newman did that in a way that also gives an indication of the profession and passions of his subjects. Many times he framed his subjects, very often other famous artists like painters, musicians and architects, in such a way that they became part of their own artistic creations. Newman kept records of his photography sessions in so called ‘sitting books’ in which he would record details of that session.  The two pages below depict the sessions with composer Igor Stravinsky for probably his most famous environmental portrait photograph. 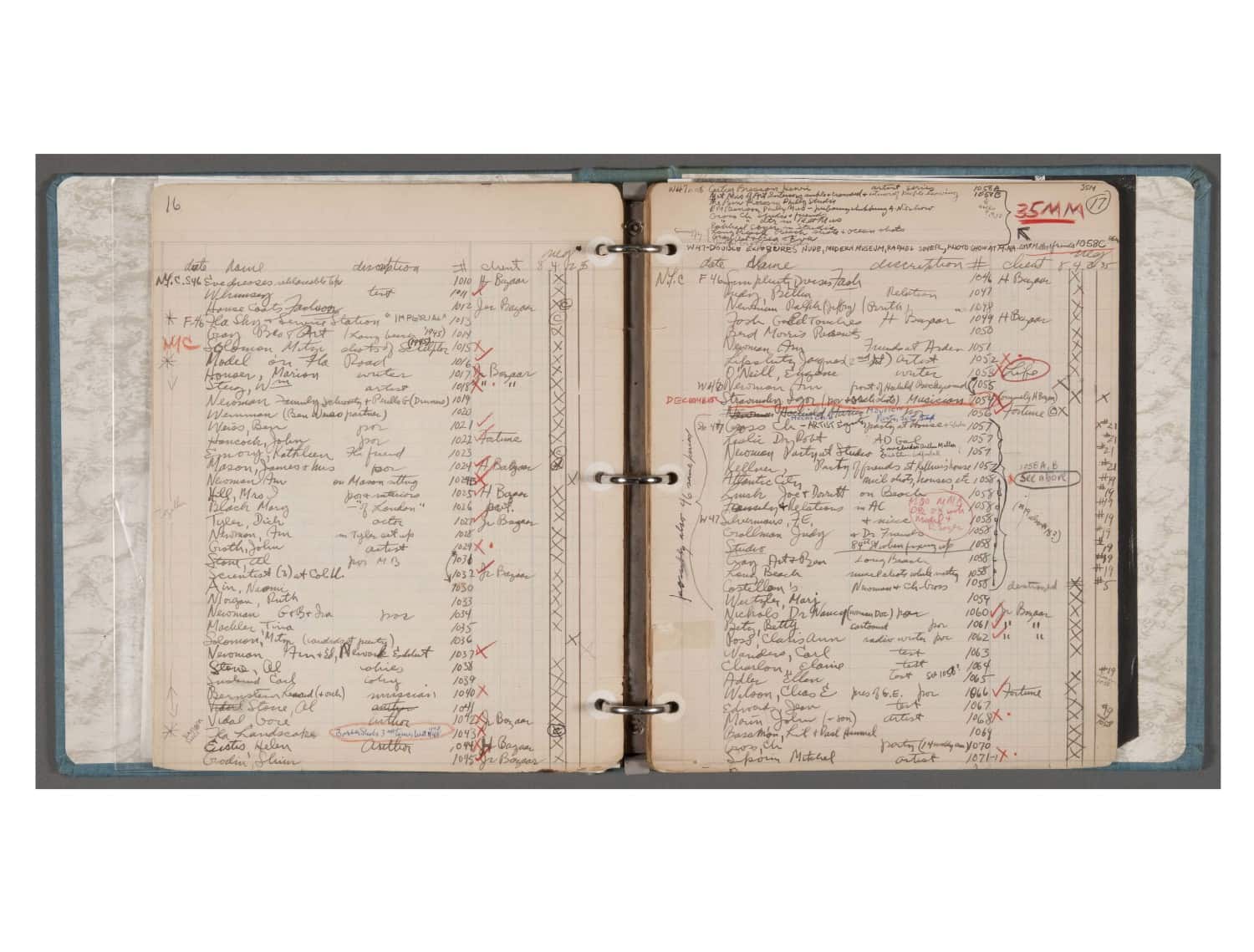 Quote: “I am convinced that any photographic attempt to show the complete man is nonsense. We can only show, as best we can, what the outer man reveals. The inner man is seldom revealed to anyone, sometimes not even the man himself.”

Quote: “Photographing at night can be fascinating because we lose some of the control over what happens in front of the camera. Over a period of time the world changes; rivers flow, planes fly by, clouds pass and the earth’s position relative to the stars is different. This accumulation of time and events, impossible for the human eye to take in, can be recorded on film. For the photographer, real can become surreal, which is exciting. During the day, when most photographs are made, scenes are usually viewed from the vantage-point of a fixed single light source, the sun. At night the light can come from unusual and multiple sources. There can be deep shadows which act as catalysts for our imagination. There is often a sense of drama, a story about to be told, secrets revealed, actors about to enter onto the stage. The night has vast potential for creativity.”

When we’re talking about documentary photography an extensive list of photographers come to mind but Dorothea Lange surely was one of the most prolific in this genre. She received a lot of recognition with her series of photos of migrant families. She documented the consequences the Great Depression had on displaced farm families, commissioned by the Farm Security Administration  When looking at her most famous photograph Migrant Mother, it reminds me, despite the obvious lack of colour, so much of Steve McCurry’s Afghan Woman. I’d say, that Migrant Mother is the Mother of this Afghan woman on more than one level.

Quote: “I am trying here to say something about the despised, the defeated, the alienated. About death and disaster, about the wounded, the crippled, the helpless, the rootless, the dislocated. About finality. About the last ditch.”

Of course this list doesn’t pretend to be an exhausting list; I could name at least a dozen other photographers who were equally important in the development of fine art photography in the past century. But then it wouldn’t be a top 10 obviously. But if you’re interested I’m listing five other names here that are worth looking up and exploring:

1. Julius Shulman: One of the greatest architectural photographers ever.

2. Richard Avedon: One of my favourite portrait/fashion photographers who created many iconic photographs of celebrities

4. Hiroshi Sugimoto: Japanese artist whose work can be seen on the U2 Album cover, ‘No line on the horizon’