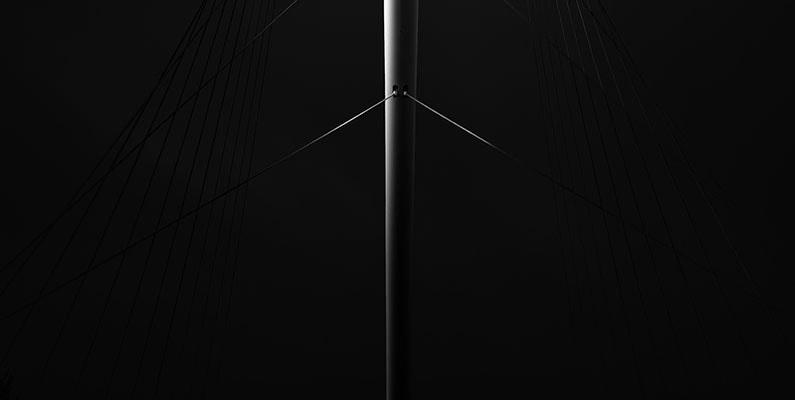 There are many wrong assumptions in black and white photography, when it comes down to tonal zones and what they represent, and how contrasts should be used to reveal details. In this tutorial I’ll try to explain what tonal zones really represent, the role of luminance values within each tonal zone, and how to use this information to create better and more subtle dark images in B&W photography. The image I’m using to demonstrate my point is the Calatrava Bridge photo that won 1st prize for Architecture at the International Photography Awards in 2014 (IPA2014). 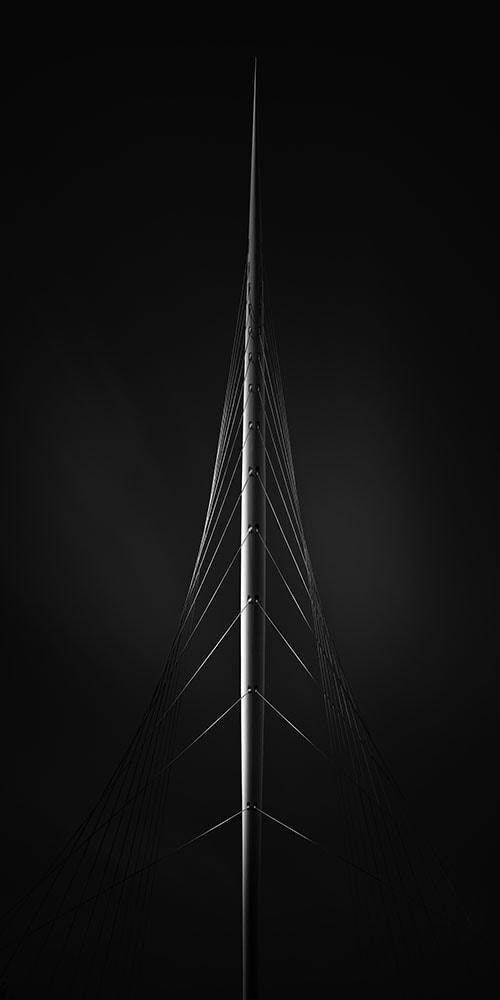 Dark Versus Light – Be Subtle

As a photographer of fine art architecture I’ve created many images with dark skies and even darker shadows around buildings. To the unexperienced eye they may look pitch black, but when you look closer and with a more trained eye, you will notice they’re not that dark: I’m just creating the illusion of darkness by playing with contrasts in a subtle way. Many times people have approached me, during workshops, asking me to assess their images with similar visual styling and dark, brooding tones. What I see in practically all cases is that the dark tones are too dark, and the brighter lights, especially in skies are too bright, hence creating an image that is too hard in contrast, where the contrast should be subtle.

What do I mean with too dark and too light?

Let’s have a look at the 2 illustrations below that represent the gray scale range. 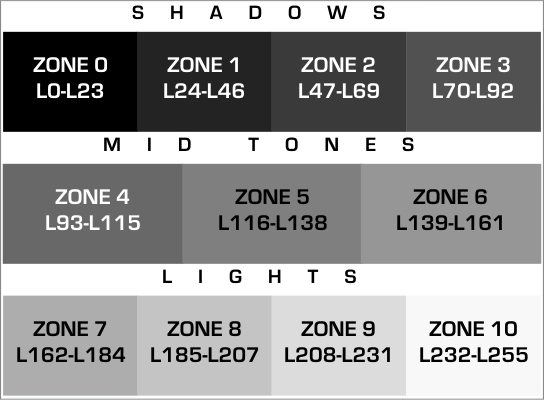 Gray scale range, presented with the commonly used names for ranges of zones

What we can deduce from the illustrations.

2. Ansel Adams taught us that the gray scale can be distributed among 11 zones from zone 0 to zone 10. Meaning all 256 values will find their place in one of those 11 zones.

3. The above implies that each zone consists of 23 values, some zones will have 24 values, to make up for an almost evenly distributed 256 values across 11 zones. Which zone that is, doesn’t matter much. I like to put 24 values in zone 0 and in zone 10.

4. The commonly used annotation for a gray tone in RGB, is for example (128, 128, 128) which value represents mid-gray as it is exactly half way 0 and 255. If the R(ed), the G(reen) and B(lue) have the exact same value, then it is always a grayscale tone, else it is a color. For example (128, 127, 128) is a subtle color tone, even if there’s only one value difference in the Green value. Since in gray scale tones R, G and B all have the same values, we can also indicate those tones with its luminance value (luminance value = light value = gray tone), in this case of mid-gray it is indicated with L128. This is the annotation I use to indicate gray values.

5. When B&W photographers talk about gray tones in relation to zones, it strikes me that they usually talk about it as if there’s no relation between zone and its place in the gray scale range. What I mean with that is the following: zone 0 is very often incorrectly associated with pure black and zone 10 incorrectly with pure white. The point is that zone 0 has 24 values ranging from L0 to L23 and zone 10 also has 24 values from L232 to L255. Now, only L0 is pure black, not the other values within zone 0 like L1, L5 or L20. L20 is much lighter than L2 for example while they’re in the same zone 0. The same goes for zone 10: only L255 is pure white and has no detail, all other values in zone 10 have increasingly more detail the more it approaches L232. Even L253 has more detail than most people think.

Now back to the image. I often play with various tones in zone 0 to create very subtle effects since zone 0 isn’t regarded as pure black by me, because that is just a wrong assertion. At the same time, I work with minimal contrast differences to create subtle highlights in the dark sky. Have  a look at the Calatrava bridge photo to see what I mean.

Visually, it looks like the areas in RED are pure black and that there are no details visible. While the area in GREEN, seems to be much brighter. Many people would say, the area in RED is zone 0, assuming it is pure black and therefore too dark, and the area in GREEN in the sky is somewhere in the darker mid-tone/ lighter shadow region, such as zone 3 perhaps 4. The visualisation of the streaks of clouds against the dark backdrop seems to be created by a contrast difference of 3 but at least 2 zones.

NOTE: the image seems darker in JPG on the web, but that is not a correct representation of the brightness in the tif file or in the real life image: this image was hanging in various galeries and exhibitions over the world, and people who have seen the photo can confirm it look much brighter than here on this website. 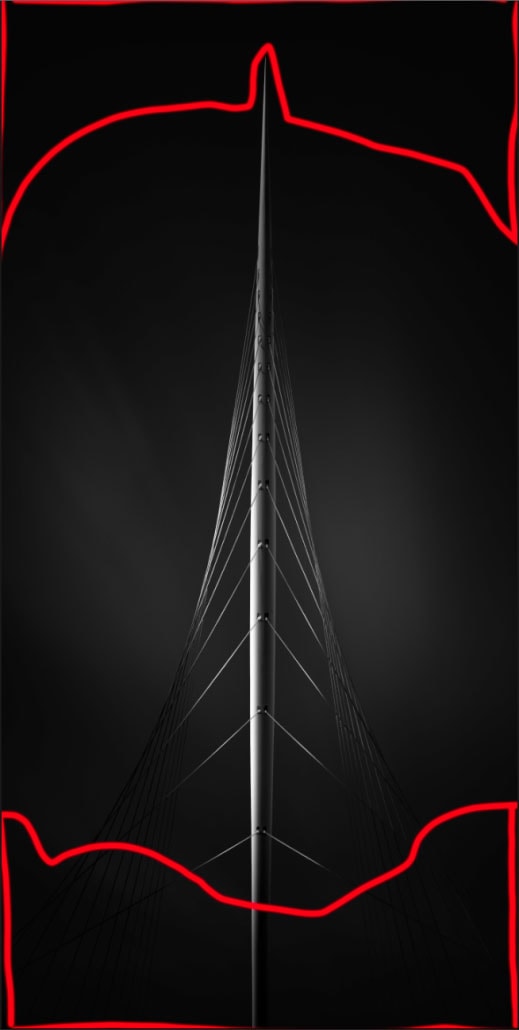 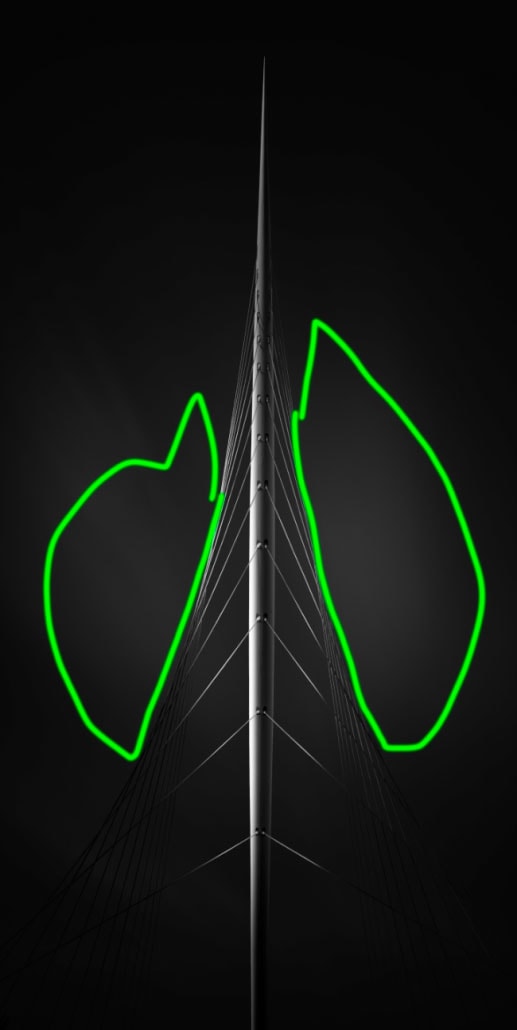 Now, closer inspection – see photo with the distribution of luminance values below – reveals that the darkest value in the RED area is L4, which is in the bridge cables (and therefore not pure black, as stated only L0 is pure black), while the average value in that area in the sky is between L8 and L11. Both values are in the lower region of zone 0 but still visible. You only need a difference of 1 luminance value to reveal some details, even in zone 0! Which is something different than the common assumption that you can’t see details in zone 0. Well, you can, and as a matter of fact, you can see a whole lot of details.

Let’s have a look at the areas in green in the other photo, assumed to be in the darker mid-tone area, visually. Now, I’m not just assuming an assumption by others: I have done various workshops where I discussed this image with in total over a hundred students, and almost without exception students would say the RED area is pitch black, and the GREEN area is somewhere in the mid-tone range, but in any case much brighter. As you can see by looking at the close up image, the darkest value in that brightest area of the sky is L22 / L23 which is still in zone 0! While the brightest value in that ‘brightest’ sky area is L38, but mostly it averages around 30. Well, that is the lower region of zone 1. Zone 1 is considered to be a dark shadow. But this was enough for me to create the illusion of something much brighter than zone 0 / zone 1 and subsequently have a very subtle contrast to make the streaks of clouds in the sky visible. 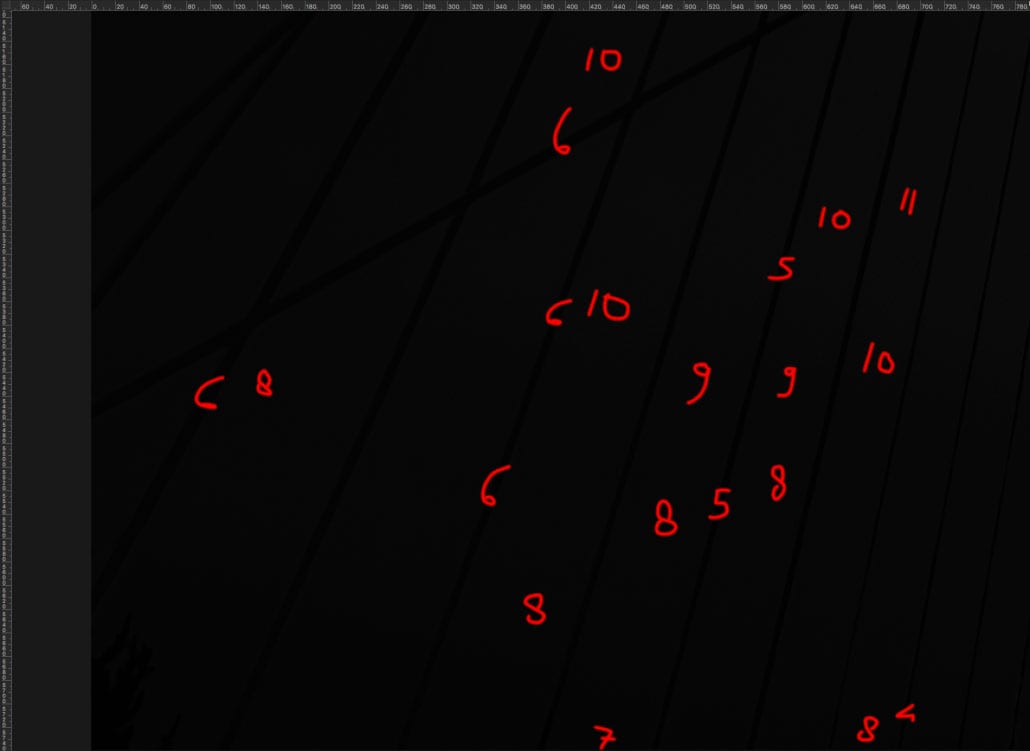 The darkest value in the RED area is L4, which is in the bridge cables (and therefore not pure black, as stated only L0 is pure black), while the average value in that area in the sky is between L8 and L11. NOTE again that this jpg image on the website looks far darker than the tif file or the real life printed image. 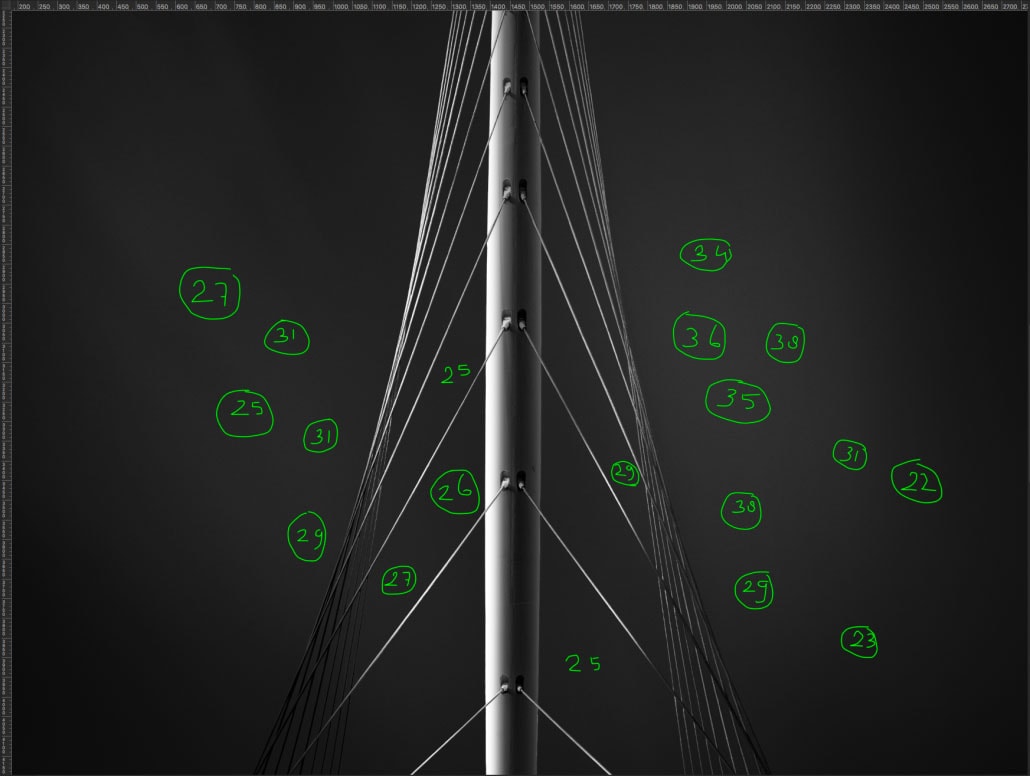 The darkest value in that brightest area of the sky is L22/ L23 which is still in zone 0! While the brightest value in that ‘brightest’ sky area is L38, but mostly it averages around 30.
Most people try to create much higher contrast in the sky to achieve a similar looking image, and then use a difference in luminance values between sky and clouds that often exceeds 7 tonal zones. This could work well in specific images, but in those cases the emphasis is on the sky in landscapes. Here the sky purely has a supporting role.

I often use the principle of selective contrast (see Rule of Grays article) to lead the eye of the viewer effectively in and through the image and make the main objects stand out. Using selective contrast to lead the eye of the viewer, doesn’t mean to push the contrast without careful consideration. Or even worse, based on wrong assumptions, such as “Zone 0 is pure black – you can’t see any details there” or “To create contrast you have to create a difference in contrasts in terms of a few tonal zones”. To reveal details you can do that in both zone 0 and in zone 10 – and of course in any other zone – as both zones have 23 or 24 different luminance values each. A luminance value difference of just 1 is enough to reveal a detail, albeit very subtly. But surely it is enough to reveal clear details with a luminance value difference of 5. And all that can be done in 1 tonal zone, even in zone 0 and 10.

Beautiful and subtle dark images with plenty of details can be created by creating subtle differences in terms of a few luminance value difference, instead of differences of entire tonal zones. This leaves you more room to work with higher (and therefore better selective) contrast in the main object of an image.

More info on the Rules of Grays and other related topics can be found in the eBook From Basics to Fine-art, that I co-wrote with Julia Anna Gospodarou. If you want to know how to create such subtle contrast differences then my B&W Artisan Pro panel will give you all the tools (I.e. the Micro Zone adjustment) to do that in an easy way. This panel will be updated to V1.2 on June 20 with some innovative features.