In this new blog post, I’m focusing on the Why instead of just the How of fine-art post-processing by presenting a few high-level principles that form the basis of a structured method of processing to create images that are visually effective and aesthetic. Principles that are software independent but also independent of your preference for color or B&W processing. To make it more practical, I’m providing examples of how to do this – the practical, technical execution – for every principle.

There’s an enormous amount of information available on the Internet on how to process images to B&W, or color for that matter, in fine-art style. Most of the time all those tutorials go into a lot of technical or otherwise very specific detail.  Furthermore, how you process your images, is almost always very dependent on the tools you use: Photoshop, Lightroom, Topaz, Skylum, plugins, etc., there’s so much to choose from. Let’s not forget our own B&W Artisan Pro X software even though our software is method-driven and not feature-driven like all other software. A little more on that and how it relates to ‘higher-level principles for fine-art editing’, further down this post.

The How – the technique – and features, are so prominently and abundantly described that it’s easy to lose sight of what it really is about, and what the process is (and there should be a process) and what we are actually aiming for when processing images to something in fine-art style or any other style for that matter. The Why – the methodology – and logical steps in a process are often missing while they are essential to better understand and perhaps improve on the How. This article focuses on the Why, while also giving recommendations for the How, in such a way that it is largely software-independent and practical.

A FEW THOUGHTS ON FINE ART

You could even add to the complexity and confusion of the topic, by stating that we should establish first what fine art is. This post isn’t the place for that type of abstract and elaborate discussion. I’ve discussed that in several older blog posts on this website (here, here, and here for example) and I’ve just finished a new more concise article on what (fine) art is that will be posted soon (will insert link here when it’s posted *Update May 26, 2021: link to new post). But for the sake of some transparency and practicality of this post, let me be more specific by saying that when I talk about processing in fine art style, I mean to say the following:

A style of processing in which we deliberately deviate from what was there in real life and what was recorded on your sensor (or film), to express and amplify a personal vision to establish a personal visual style, that could only be achieved by additional processing.

A visual style that is not only aesthetic but also effective as a result of the aesthetic criteria we’ve chosen to support our artistic intentions and messages through the images we create.

Even more simplified: anything that is not straight-out-of-camera and is aesthetic and effective.

So, effective and aesthetic by way of post-processing.

Beauty is in the eye of the beholder as the saying goes, but throughout the history of photography and of the visual arts in general some concepts and high-level principles have been developed and have been proven to be effective and that should serve as guidelines for creating aesthetic and effective images. I would go as far as to say that an effective image is also aesthetic and vice versa.

Let’s try and break down what those high-level principles are, derived from my own personal experience which in turn is derived from, and inspired by, many great images and findings from the past and present in visual arts in general, and not just photography. Because, I believe strongly that in order to create images that can be considered authentic, meaningful, and aesthetic, we need to be visually articulate and literate. And for that, we need to study the masters of all visual expressions.

In this analysis, I’m going to leave the meaning of images, or the artistic intention and message aside. I’m also going to leave out compositional principles like rules of thirds, golden ratio, leading lines. Those are important elements that come before post-processing the images and are out of scope for this article on post-processing. 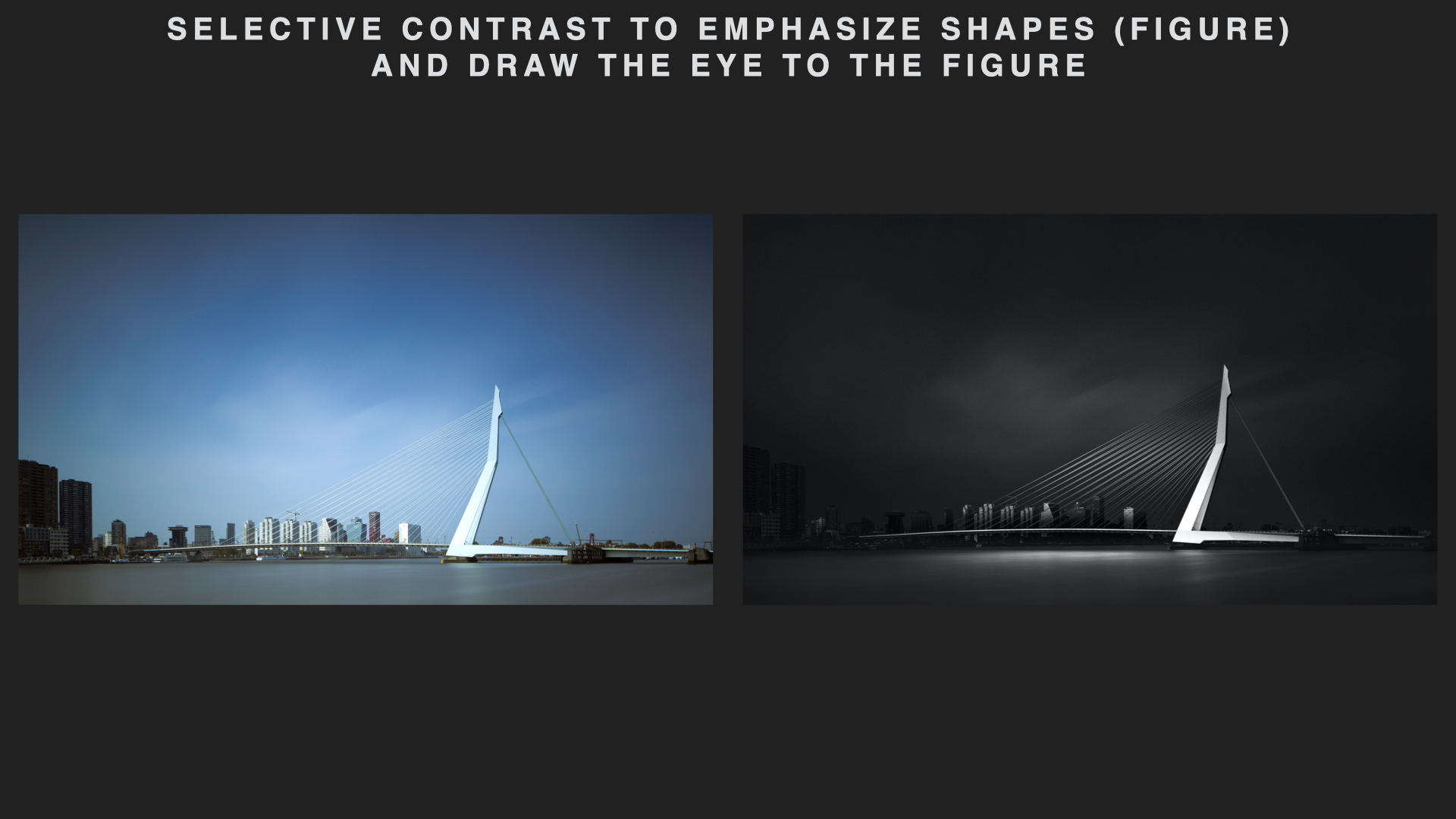 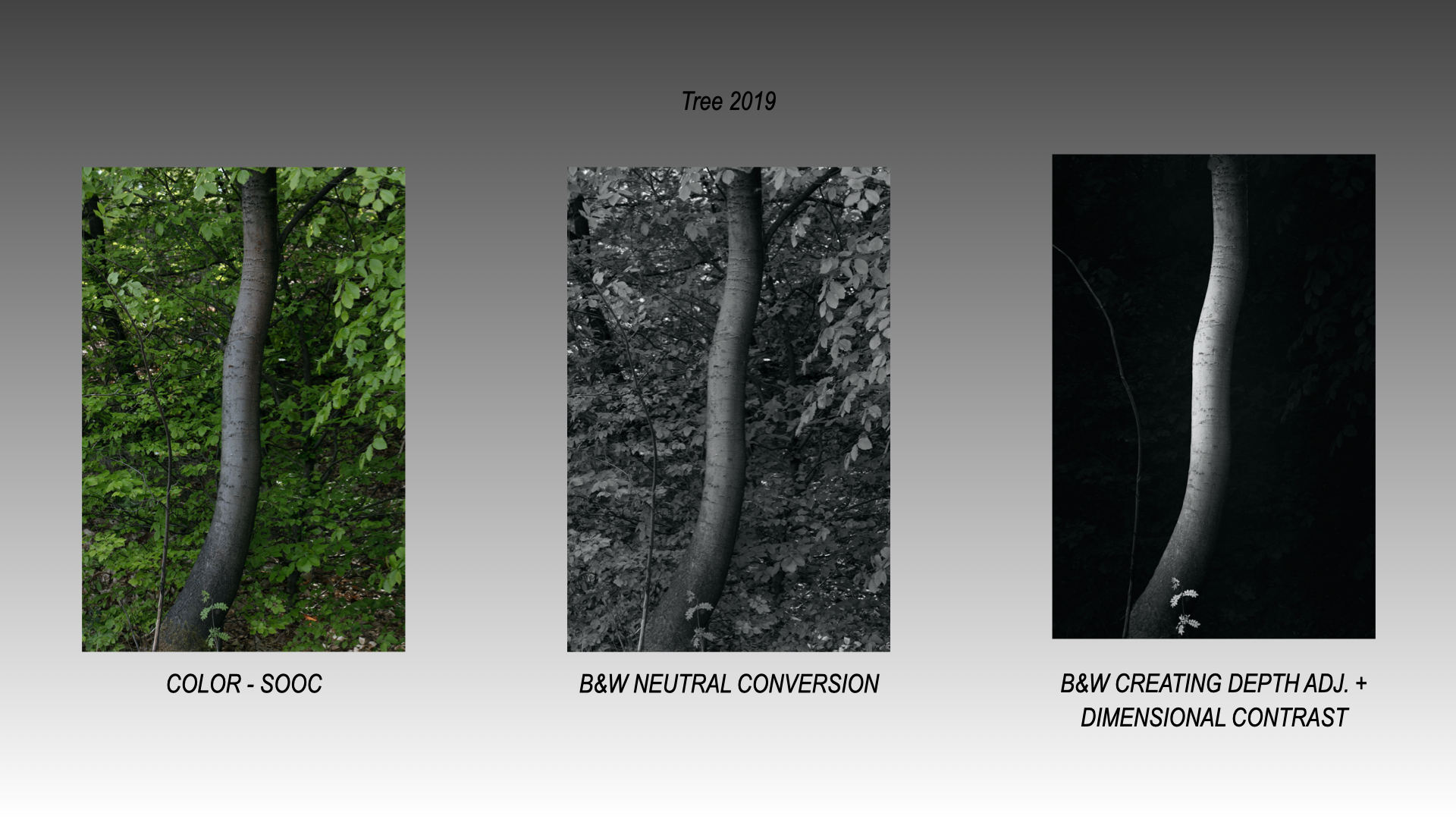 Perhaps the highest level of image analysis is to break down an image into 2 simple elements: the figure and the ground. A principle, very well described by author Mark Getlein in his book Living with Art. It comes down to establishing what your most important object is, the figure, and your supporting background, the ground. The ground can be anything that is not your figure. A foreground can be ground, and so can a sky or any other type of background. If you want to know more, I’ve also written about it in this post.

So what to do after you’ve determined your figure and ground? To effectively draw the eye in, the figure and the area of the ground that intersects closely with the figure should have the highest contrast and the brightest light, and the most details. Ideally, everything else should be lower in contrast and darker to effectively draw the eye in. Ideally, which doesn’t mean, always. If you understand this concept then you could play with ‘tension’ in other parts of the image and break this rule. Or perhaps there is more than 1 figure in your image. Let’s stick with the simplest version of just 1 figure and ground.

You will find that even though you know exactly what your figure and ground are and had that in mind when taking the shot in the field, the amount and distribution of contrast and highlights and shadows aren’t as they should be to be effective. In that case, this will need to be corrected in post-production. And to do that effectively with the most control you will need to isolate the figure from its ground. And here’s where masking comes in. At the very least you need to at least have a hard mask from the figure and from the ground. Those two masks are called critical masks. From there, internal masks can be derived that are especially needed when you have geometric or manmade objects. And they are almost always a hard mask as they need to isolate a figure from its ground, not a soft or luminosity mask. Luminosity masks isolate light, not a figure unless the distribution of light intensities coincides exactly with the figure and ground, which is usually not the case.

Masking and, often completely neglected, good mask analysis is a separate set of Photoshop and in-the-field skills that, if done the right way, requires more than just learning a Photoshop technique or trick. I have explained everything on masking and the correct methods, analysis, and workflow in my 5-hour Advanced Masking video, and is too elaborate to cover here. I have also written a blog post called Photoshop Masks and Selections Guide that you may use as a starting point.

APPLYING THE HIGH-LEVEL PRINCIPLES TO IMAGES

Now we have described and explained the high-level principles, how can we put this into practice in post-processing, independent of what processing technique or software we use? For that, I have created a sequence of steps presented below.

Note that all steps after step 2 are grouped in Figure and Ground steps, and I start with the Ground first, but this is just a personal preference. If you prefer to start with the Figure, you should. Also, note that steps 3 to 10 can be repeated as many times as needed. There’s a special place for step 10 in my personal workflow as that is a step, I would insert frequently after every step after step 2.

An example with image analysis and the principles applied as ‘visualization notes’.

OVERVIEW OF RECOMMENDED TECHNIQUES FOR APPLYING THE HIGH-LEVEL PRINCIPLES

All steps are completely independent of the software or techniques you prefer to use. Having said this, isolating Figure from Ground (the creation of the critical mask) can only be done with the highest degree of accuracy and the highest chance of success with Photoshop. And to some extent this also applies to the other steps after step 2: the highest accuracy and the subtlest of any of the adjustments per step can be achieved in Photoshop and to a lesser extent in other software.

On a side-note: my B&W Artisan Pro X panel, which is a plug-in for Photoshop, using Photoshop technology, is targeted at executing all those steps in the ‘More recommended’ column. That’s no coincidence: the method was initially a fully manual method (my iSGM manual workflow) and the panel is specifically built on that manual method and is, therefore, a ‘method driven panel instead of being the usual feature-driven software. For this reason, it takes time and effort to learn to use the panel, because you’re essentially learning a method and structured workflow instead of intuitively and often randomly working your way around a photo. That works for some of the great masters, but rarely for the average photographer.